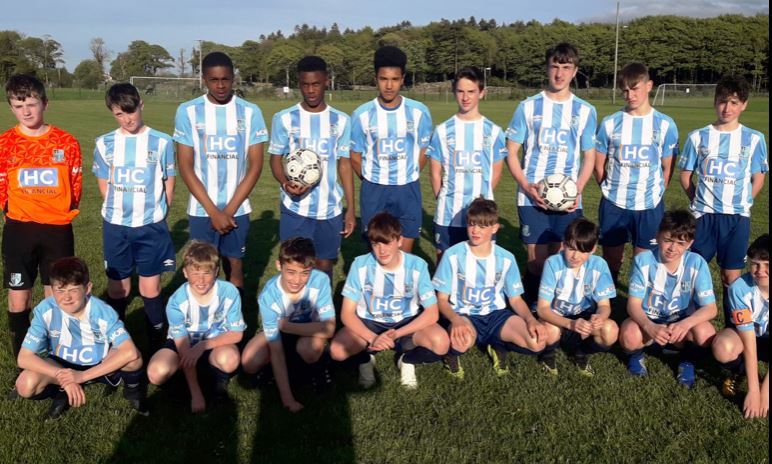 Last Saturday afternoon (25th May) the U14A’s travelled out the N17 to play Tuam Celtic FC in the quarter final of the U14 Premier/Championship Cup. Recently the sides met in the league which ended in a draw, conditions in Tuam on that particular day were very difficult with strong winds. Thankfully on Saturday conditions were perfect for playing football. Devon scored early after a lovely worked move, Evan Ridge worked the ball out from defence, passing to Dylan Devine Darcy who gave a lovely one two interchange with Sean Orujuba, Sean gave a through ball to Bright Broderick’s who provided a neat cross to Piotrek Szymanski who finished the ball to the net. It looked like Devon would add to their tally before half time, the Tuam Keeper made a great reactionary save from Piotrek who was looking for his second and shortly after that on he also hit the woodwork when looking certain to score. The second half was a typical cup battle and the Tuam lads did their best to get back in the match. Despite this period of Tuam pressure Devon had a couple of chances to finish out the tie but on two occasions Daniel Hoare put the ball in the Tuam net only to be judged off-side by the referee. In the end it finished out a one nil victory to the Devon lads who will now meet Maree Oranmore FC away in the semi-final.

Notable performances were the back five who worked well together throughout the game, Piotrek Szymanski who worked tirelessly upfront and Fionn Silke who put in a man of the match performance. Missing on the day were Darren Darcy, Eric Diarra, Charlie Quinn and Sean O’Connor

Calling all Salthill Devon supporters ! We have reschedu...

Salthill Devon's Last Man Standing has been won! The last...

Round 10 kicks off Saturday 23rd November. Entries for w...

Round 8 kicks off Saturday 23rd November. Entries for we...

Round 8 kicks off Friday 8th November. Entries for week ...

Get live information for Club on the ClubZap App