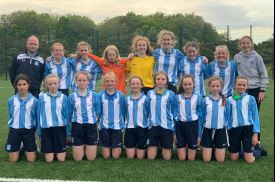 Salthill Devon U14 girls made it 14 straight wins in the league scoring a total of 90 goals and only conceding 4. The girls now play Sunday the 19th at 2pm in EDP against Mervue in a playoff for the league cup.

Last Wednesday evening the u14 girls progressed to the Galway cup final with a fantastic 4-0 win away to Knocknacarra in Cappagh Park. Daisy O'Connell opened the scoring with a superb low shot into the bottom corner of the net. Emily Fitzgerald made it 2 after great work by Daisy O'Connell on the right wing. In the 2nd half Emily Fitzgerald made it 3 nil with a great free kick from the edge of the box. With 10 minutes to go Emily completed her hatrick , well done to Eleanor Hernon who was superb in goals. Great squad performance.

The girls now play Mervue in the Galway cup final in EDP at 11.30 in the 26th of may

Calling all Salthill Devon supporters ! We have reschedu...

Salthill Devon's Last Man Standing has been won! The last...

Round 10 kicks off Saturday 23rd November. Entries for w...

Round 8 kicks off Saturday 23rd November. Entries for we...

Round 8 kicks off Friday 8th November. Entries for week ...

Get live information for Club on the ClubZap App